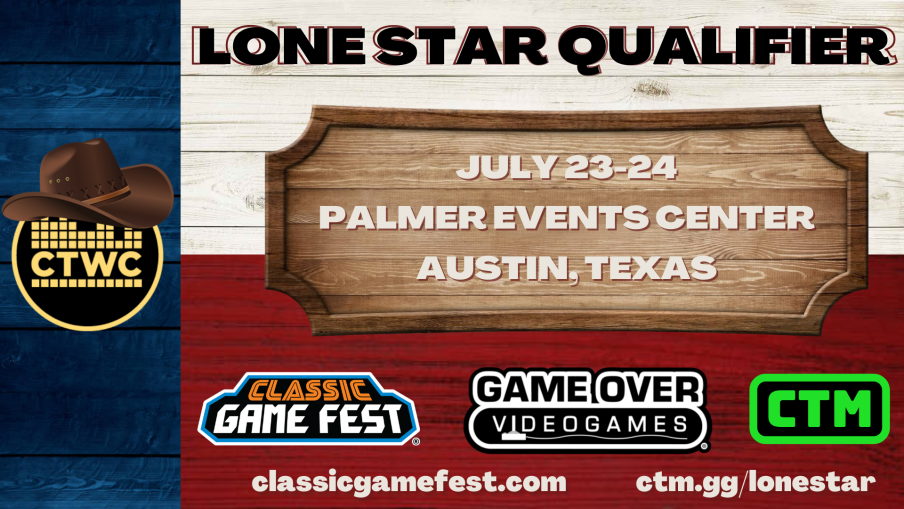 Contributions for the CTWC Qualifier accepted now through Matcherino

For the main qualifier, quals will be number of maxouts + kicker, following the CTWC rules for qualifying. There will be 12 seeds available. You’ll have three ways to qualify:

1) Qualify in line at the event! Quals will open at 9 AM with last game called at 12:45 PM. We will have 8 stations available, though some will be reserved as rental stations. The convention opens for VIPs at 9 AM and to general audiences at 10 AM.

You can choose one of the following, but not both.

2A) 1 hour rental stations in person at the event! If you are interested in a qualifying station, please fill out this form. We’ll try to accommodate as many folks as possible in their preferred time. Each rental station is $10, and you’ll be able to reserve 1 slot for 1 hour. Submit the form by Thursday 11:59 PM CT; we’ll announce rental station times on Friday: Google Form

2B) Online via the CTM website! You’ll be given an authword, 1 hour for quals. You’ll submit the number of maxouts plus your highest kicker, HANDCAM REQUIRED! You can start your qualifier any time before Friday, July 22 at 3 PM: Qualify

During this round, competitors will play NES Tetris A-Type and try to get the highest score possible. The qualifying round will run for a period of time that will be clearly posted at the tournament venue. At the end of the qualifying round, players with the top scores* will advance to the first round.

A designated group of NES machines will be used for the Qualifying Round. Players should line up, wait until they reach the front of the line, then take their place at one of the available NES consoles and start their game.

Each player is allowed to play a single game, starting on level 9 or higher. There is no “warm up” time allowed on the machines provided for the Qualifying Round. If a player starts on a level below 9, they will have one opportunity to reset the game and start on level 9 or higher.

Using the scores obtained during the Qualifying Round, the top players are seeded in a single elimination tournament.

The remaining rounds consist of two player NES Tetris A-Type matches. Before the first game of each match, players will be given 1-2 minutes of “warm up” time. After the warm up time, the player with the higher seed will choose the starting level. The standard available starting level options for CTWC events are typically 15 and 18*. After the first game, players take turns choosing the starting level. When the players are ready, a tournament official will issue a 3-2-1 countdown, at which point the players will simultaneously begin their game by pressing start on their controller. Game play will continue until one of the following scenarios occurs:

In either scenario, the player with the highest score wins the game.

*Some Regional tournaments may allow players to start on levels as low as 9, depending on the anticipated skill level of the competitors and time available. Tournament officials will make this known at the tournament venue in advance.

These matches are best-of-3. The first player to win 2 games will advance to the next round. Time permitting, these rounds may also be best-of-5/first to 3.

The final match is best-of-5. The first player to win 3 games wins the tournament.